The Mashup Movie was produced in 2009 and had a limited release to 40 people in the screening room of Soho House.
The reception was ecstatic with words like: ‘disgusting’, ‘depraved’, ‘hilarious’, ‘smutty’, ‘revolutionary’ and ‘puke-inducingly funny’, being liberally sprinkled among the audience.

Unable to find a distributer to take on this controversial piece of cinematic detritus, it languished for years on an old novelty memory stick shaped like a carrot before being re-discovered, dusted off and prepared for screening.

It’s a fascinating, powerful, filthy and absurdly unbelievable story revolving around the Falcon, a private detective who has re-inventing himself as an impressionist.
Unwittingly, he becomes involved in a plot by the Queen of Mars to destabilise the world.
The rest of the storyline is impossible to describe, so there’s no point trying.

We are now bringing this masterpiece of comic redubbing to a wider audience by premiering it in October 2021 on on Comedyplaza.com

Short scenes will be appearing on the website and on Instagram: @comedyplazauk
Screening date and time will be announced soon.

Meanwhile, here is the title sequence with some of the cast list. 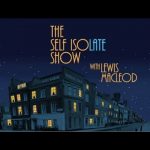